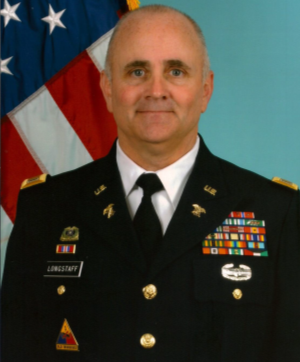 Chief Warrant Officer Five David Longstaff entered the Army on 22 May 1984.  His duty assignments include numerous Continental United States locations. Overseas assignments include Egypt, Germany, two tours in Iraq (one with the Military Transition Team). He was selected as the first food advisor to be a logistics trainer for the Iraqi Prime Minister’s National Police Force. He also served as the Army Central Command Food Advisor.

CW5 Longstaff consistently set the example for all Quartermasters as he became a Certified Executive Chef with the American Culinary Federation (one of only 2 at the time in the Army).  CW5 Longstaff was also inducted into the prestigious American Academy of Chefs in 2007.   He managed the U.S. Army Culinary Olympic Team from 2003-2006. During his tenure, he competed in the culinary Olympics in Germany as well as the Culinary World Cup in Luxembourg. As one of the most highly respected Quartermasters, CW5 Longstaff is consistently requested to be the keynote speaker at both the military and civilian conferences.

His civilian education includes culinary classes at the Culinary Institute of America, an Associate’s Degree in Culinary Skills, and a Bachelor’s Degree in Management.