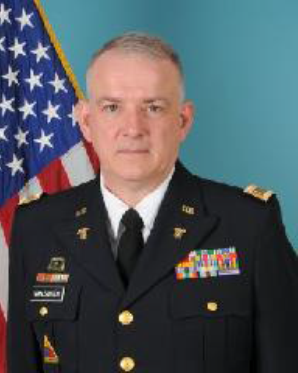 CW5 Van Zanten’s first duty station was in the Republic of Viet Nam where he served as a Teletype Repairman.  Upon his return from Vietnam, he was assigned to the Army Security Agency’s Materiel Support Command at Vint Hill Farms Station Virginia. He obtained a discharge and subsequently joined the Army Reserve. CW5 Van Zanten was appointed as a Warrant Officer and attended the Quartermaster Food Service Technician Course. He graduated as the Distinguished Honor Graduate. CW5 Van Zanten joined the Active Guard Reserve program. He served as a Trainer Advisor Counselor Officer at the Reserve Component Warrant Officer Candidate School at Fort McCoy, Wisconsin.  He was re- assigned to the 95th Division (Training) in Oklahoma City.  He returned to active duty with the Active Army and served with the 507th Corps Support Group, 2nd Materiel Management Command, and Headquarters, 1st Corps Support Command at Fort Bragg.  His next assignment was with the 1st Armored Division in Germany.  He deployed with the Division in support of Operation Iraqi Freedom.  He was then assigned to the XVIII Airborne Corps Distribution Center which resulted in returning to Iraq a year later. On his return, he was selected as the Forces Command Food Advisor at Fort McPherson followed by selection as The Army Food Advisor and Quartermaster Regimental Chief Warrant Officer. His final assignment was the United States Army Europe Food Advisor.