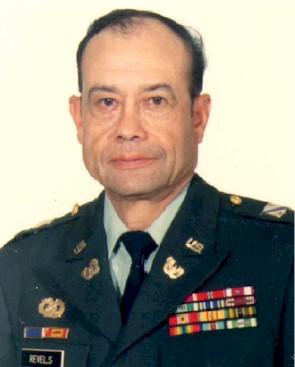 CW5 Revels entered the Army in 1958, serving twelve years as an Enlisted Soldier before being commissioned a Quartermaster Warrant Officer in August 1970. He served in the latter capacity until his retirement in April 1995 – for a total of 37 years active-duty service.

CW5 Revels began his Warrant Officer career with the 2nd Battalion, 502nd Infantry, 101st Airborne Division in Vietnam, an Airmobile Infantry Battalion involved in counter insurgency operations. During this assignment he established the reputation of a mission oriented, extremely effective supply technician whose quiet methodical approach to each task characterized his outstanding performance.

Throughout his long military career, CW5 Revels worked tirelessly to better the Army’s Supply Systems programs and the soldiers who worked with them. Among his many key assignments were two tours with the U.S. Army Field Station in Augsburg, Germany, as Officer in Charge for the largest Direct Support Unit in Intelligence and Security Command (1979-81) and as Senior Supply Administrator for a brigade size strategic intelligence communication complex.