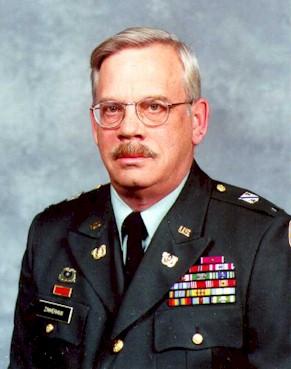 CW5 Zimmerman began his military career as an Enlisted Soldier at Fort Jackson, South Carolina, in 1960. Following his discharge in 1963, he served with the Georgia Army National Guard until he was recalled to active duty as a Supply Warrant Officer in August 1967. He continued to serve in that capacity until his retirement three decades later, in September 1997.

In addition to the many technical assignments that Mr. Zimmerman performed throughout his career, he has served with distinction as: The single subject matter expert and project officer who designed, developed and implemented the Army’s Standard Property Book System. The first Chief Warrant Officer of the Quartermaster Regiment. The Quartermaster Proponent representative to the Department of the Army total Warrant Officer Study. A senior member of the first Department of the Army worldwide warrant officer recruiting team. The Senior Combat Service Support Warrant Officer Personnel Proponent Officer at the U.S. Army Combined Arms Support Command. And Chief Evaluator for the Army Chief of Staff’s Supply Excellence Award Program.

CW5 Zimmerman’s manifold skills and accomplishments are widely recognized throughout the Army, and he has played a singular role in helping to ensure the high caliber of warrant officers serving in the Quartermaster Corps today.