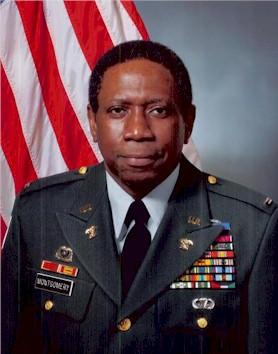 CW5 Montgomery was a U.S. Army Quartermaster Corps Chief Warrant Officer Five who was widely recognized as one of the Army’s foremost food service advisors.

Born in Pensacola, Florida he began his military career as an enlisted soldier in 1965, serving his first tour of duty as a combat Infantryman and later as a cook with Company C, 1st Battalion, 503rd Airborne Infantry, 173rd Airborne Brigade (Separate), Bien Hoa, Vietnam. He rose to the rank of Sergeant First Class before appointment as a warrant officer in 1977.

He played a key role in the redesign of remote feeding sites using off- the- shelf commercial state of the art kitchen equipment. Montgomery was instrumental in the revitalization of the Quartermaster Warrant Officer Training with Industry Program and he assisted in the development and testing of two major subsystems of the Combat Field Fielding System (Mobile Kitchen Trailer and Supplemental Field Kitchen Kit). As Quartermaster Personnel Management Officer during the Army drawdown in Europe, he developed a distribution plan to staff critical fills where jobs outnumbered assets. His last assignment was as the Combined Arms Support Command Senior Personnel Proponency Officer, where he played an important role in the Army Training Leadership Development Panel Study on Army Transformation challenges and its effect on warrant officers in all grades.

His military awards include the Legion of Merit, the Meritorious Service Medal (with five Oak Leaf Clusters), the Army Achievement Medal (w/ four Oak Leaf Clusters), the Armed Forces Expeditionary Medal, the Vietnamese Cross of Gallantry with Palm, the Southwest Asia Service Medal, as well as the Saudi Arabia and Kuwait Liberation Medals. He also earned the Combat Infantryman Badge and Parachutist Badge.