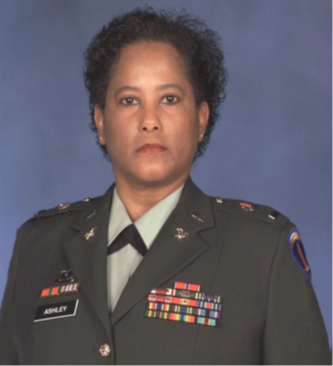 CW5 Ashley enlisted into the U.S. Army and after 12 years of distinguished service, she received her Warrant Officer Appointment as a Food Service Technician.

During deployment of Operation Iraqi Freedom II, she was lauded (bronze star medal) by the Task Force Commander for superb duty performance in ensuring that high quality meals were provided on a continuous basis to twenty-six thousand Task Force Soldiers and Multi-National Forces located at twenty-seven forward operating bases.

CW5 Ashley completed every level of the Warrant Officer Education System. She holds a Bachelor of Arts Degree from the University of Maryland. She is a Distinguished Member of the Quartermaster Corps and is a recipient of the Distinguished Quartermaster Order of Saint Martin. CW5 Ashley retired from Active Duty on October 1, 2010, culminating a 34-year military career. In her final assignment, she served as the Theater Food Advisor, Headquarters United States Army Europe and 7th Army, Deputy Chief of Staff, G-4, Heidelberg, Germany; she was the first female Soldier to serve in this prestigious position.