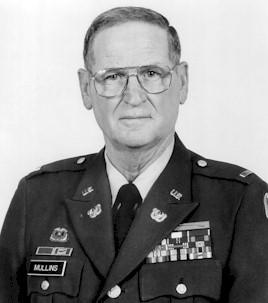 CW5 Mullins began his military career as an Enlisted Soldier in 1955 and rose to the rank of Sergeant First Class (Promotable) before being commissioned a Warrant Officer in 1969.

He served his first tour as a Warrant Officer in Vietnam with an Air Defense Artillery Battery, then with the 14th Armored Cavalry Regiment in Europe, where his unit won best supply operation in V Corps for two years. As a CW2, CW5 Mullins oversaw logistical support for 25,000 Vietnam refugees while supporting 20,000 Reserve Component personnel for annual training.

CW5 Mullins’ brilliant career saw 41 years of service, spanning five decades. A Distinguished Member of the Quartermaster Regiment and Order of Saint Martin awardee, he has often been described by superior officers as “Simply the Best.” In a most recent contribution, CW5 Mullins directed the Total Warrant Officer Study and developed a highly acclaimed 30-year Management Plan for Army Warrant Officers.