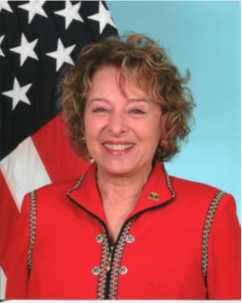 Dr. Pruett served as an exceptional Quartermaster civilian.  She distinguished herself by earning a PhD in Adult Education from Virginia Commonwealth University, leading our Quartermaster culinary training; managing seven culinary arts competitions; and leading the US Army Culinary Arts Team to World Champions in the 2000 World Culinary Olympics.  She was selected as CASCOM’s first Director of Quality Assurance where she developed a system to formalize multi-functional field feedback via studies and surveys.  Her leadership also resulted in the Army’s Reverse Collection and Analysis Team Program.  This allowed the Army to share lessons learned by the Brigade Combat Teams in the areas of doctrinal employment; training successes and challenges; organizational design; and materiel system use while deployed. Dr. Pruett served as the Senior Logistics Engineer, Base Closure and Realignment (BRAC) Team with the mission to implement the 2005 BRAC Commission guidance to stand up a Sustainment Center of Excellence by September 2011.  This included moving a myriad of missions to Fort Lee:  the Ordnance Center and School from Redstone Arsenal, Alabama and Aberdeen Proving Grounds, Maryland; the Transportation Center and School from Fort Eustis, Virginia; the Air Force Transportation Command Management training from Lackland Air Force Base, Texas; the Air Force and Navy Culinary training from Lackland and Great Lakes Naval Station, Illinois; consolidate the Defense Commissary Agency activities from San Antonio, Texas, Virginia Beach, Virginia, and Hopewell, Virginia; and the Headquarters of the Defense Contract Management Agency from Fort Belvoir. Additionally, the actions required consolidation/formation of the Joint Culinary Center of Excellence; and establishment of the Army Logistics University.  All BRAC actions, construction, personnel moves, equipment relocations were completed on time and with no disruption to classes.