Back to List
GEN Johnnie E. Wilson
Class of 2019 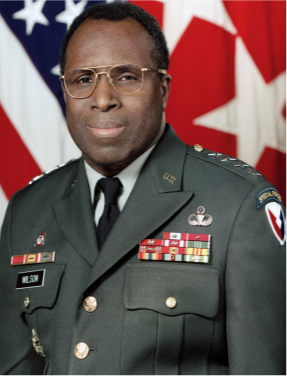 General Wilson entered the Army as an Enlisted Soldier as a Materiel Control and Accounting Specialist and reached the rank of Staff Sergeant before attending Officer Candidate School (OCS). On completion of OCS, he was commissioned a Second Lieutenant in the Ordnance Corps. He was awarded a Bachelor of Science degree in Business Administration from the University of Nebraska at Omaha, and a Master of Science degree in Logistics Management from the Florida Institute of Technology.

His military education includes completion of the Ordnance Officer Basic and Advanced Courses, the Army Command and General Staff College, and the Industrial College of the Armed Forces. From 1969 to 1970, General Wilson served as the Commander, Company C, 173rd Support Battalion (Airborne) in the Republic of Vietnam.

In 1989, Wilson was promoted to Brigadier General, and in 1994 he became a Lieutenant General. From 1994 to 1996, General Wilson served as the Deputy Chief of Staff for Logistics for the United States Army – the Pentagon. In 1996, he was promoted to Four-Star General, and became Commanding General of the United States Army Materiel Command. With this position, Wilson was in charge of 68,000 people in 350 different locations around the world.

General Wilson was inducted into the Ordnance Corps Hall of Fame in 1999.