Back to List
GEN Richard H. Thompson
Class of 1991 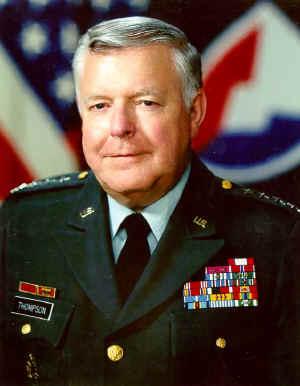 General Richard H. Thompson began his 42-year term as an enlisted soldier and became the first Quartermaster Officer in the Corps’ 200-year history to hold the rank of full General while still on active duty. He also was the first commander of the Troop Support and Aviation Materiel Readiness Command. General Thompson was one of the principal architects in the buildup and modernization during the Post-Vietnam Era “logistics Revolution” of the 1980s.

He entered in the Army in November 1944 and advanced to the grade of staff sergeant before being commissioned a second lieutenant. He served first at Fort Hamilton and then was assigned to Japan, where he performed duties as the Army Exchange Officer at Kokura. He returned to the U.S. in March 1957 to take the Associate Infantry Company Officer Course at the United States Army Infantry School. Upon completion, he was assigned to Fort Chaffee, Arkansas. In the two years he was stationed there, General Thompson attained a Bachelor of Arts Degree in Social Science from the College of the Ozarks (now the University of the Ozarks).

From September 1959 to May 1960, General Thompson attended the Quartermaster Officer Advanced Course at Fort Lee, Virginia, and from there was assigned to Korea, serving until August 1961 as S-4, 321st U.S. Army Security Agency Battalion at Camp Red Cloud. From Korea, he attended the U.S. Air Force Air University, Air Command and Staff College, and until August 1965 worked in multiple jobs as a staff officer in the Office of the Deputy Chief of Staff for Logistics (DCSLOG). He enrolled at the George Washington University at that time and graduated with a Master’s Degree in Public Administration in June 1968. Prior to the completion of his tour at the Department of the Army, he also went on temporary duty to the Army Logistics Management Center at Fort Lee in April 1965 and completed the Army Supply Management Course.

He then attended the Armed Forces Staff College. From there he was reassigned to Frankfurt, Germany, in October 1966, where he commanded the 503d Supply and Transport Battalion, 3rd Armored Division. He remained in Germany until August 1967 when he returned to Washington to attend the National War College. He was then assigned as a logistics systems officer with the Assistant Vice Chief of Staff and then as Chief of the Tactical Support Systems Group.

In August 1980, he was reassigned to HQDA as Assistant Deputy Chief of Staff for Logistics. One year later, General Thompson was promoted to lieutenant general and became the Army DCSLOG. On 29 June 1984, General Thompson received his fourth star and began his assignment as Commander of the U.S. Army Materiel Command, a position he held until his retirement in April 1987.