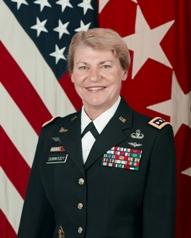 General Ann E. Dunwoody served as the 17th Commanding General of the United States Army Materiel Command (AMC). AMC is one of the largest commands in the Army with more than 69,000 employees and impacts or has a presence in all 50 states and in 145 countries.

General Dunwoody received a direct commission as a Quartermaster officer in 1975, after graduating from the State University of New York at Cortland.

Her key staff assignments include 82d Division Parachute Officer; Strategic Planner for the Chief of Staff of the Army; Executive Officer to the Director, Defense Logistics Agency; and Deputy Chief of Staff for Logistics – Army G-4). She deployed for Desert Shield and Desert Storm with the 82d as the Division Parachute Officer from September 1990 to March 1991, and in 2001, as CG, 1st COSCOM she deployed the Log Task Force in support of Operation Enduring Freedom One and stood up the Joint Logistics Command in Uzbekistan in support of Combined Joint Task Force-180.

General Dunwoody has been married to Colonel Craig Brotchie, USAF (Retired). They have one dog, Barney.