Back to List
LTC Charles D. Butte
Class of 2008 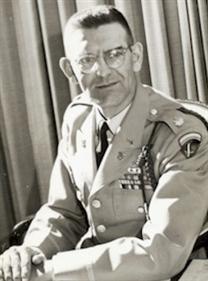 LTC Butte was born in Duquesne, Pennsylvania, and enlisted in the United States Army in February 1943. He served with the 603rd Quartermaster Graves Registration Company in Europe in World War II, and took part in the Normandy Invasion and the Battle of the Bulge, and while still in Europe was commissioned Second Lieutenant.

He became an Airborne Jumpmaster following the war, and served with the 407th Quartermaster Company (Airborne) at Fort Bragg, North Carolina. A qualified rigger, he also served as an instructor and Chief of the Maintenance Branch at the Quartermaster School’s Airborne Department at Fort Lee in the early 1950s. Between 1954 and 1963, he held a variety of key Aerial Delivery and Field Services assignments in Korea, Germany, and at bases in the United States.

Lieutenant Colonel Butte returned to the 82nd Airborne Division (1963-65) and, among other assignments, was the Division Out-Loading Officer for the Dominican Republic Airborne Combat Operation, and later commanded the 407th Supply and Transportation Battalion. In 1966 he deployed to Vietnam with the 543rd Quartermaster Group and served as Special Projects Officer to deal with mounting supply problems in the Saigon Logistical Command.

Throughout his 24-year military career, and in the four decades since, Lieutenant Colonel Butte has been a tireless advocate of Quartermaster history and heritage, especially in the area of mortuary affairs.

His many awards and decorations include the Legion of Merit, the Bronze Star medal, the Belgian Fourragere, the Army Commendation Medal (with Oak Leaf Cluster), Master Parachutist badge, Rigger badge, Korean Parachute Wings, five Battle Stars, and a Bronze Arrowhead for the Normandy Invasion.