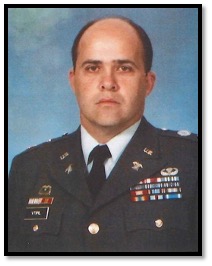 Lieutenant Colonel Donald Vtipil’s key assignments include: Director, Army Center of Excellence, Subsistence, Fort Lee; Executive Officer, Defense Supply Center Philadelphia, Wiesbaden, Germany; Food Service Officer, Training and Doctrine Command, Fort Monroe; and Director of Logistics and Store Operations, Defense Commissary Agency, Maxwell AFB, Alabama. Under LTC Vtipil’s leadership, he created a program to improve the annual Culinary Arts Show by making it both a national and international event for participants. This included allowing international teams and international judges to participate which significantly raised the awareness of this marquee event. Over the successive following years, the culinary show grew with even more exciting ideas to include live cooking that allowed spectators to participate in the dining. For the first time ever, the spectators became a part of the event. His work in this area is still carried on annually at the Culinary Arts Show.