Back to List
LTG Andrew T. McNamara
Class of 1988 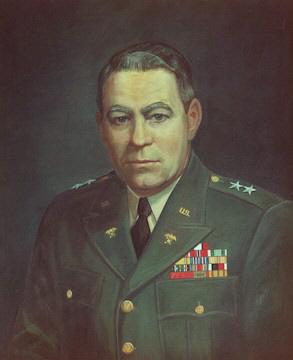 Andrew Thomas McNamara was born in East Providence, Rhode Island, on 14 May 1905. He graduated from the U.S. Military Academy and was commissioned a Second Lieutenant in the Infantry on 9 June 1928. His first assignment was with the 28th Infantry at Madison Barracks, New York.

In April 1931, General McNamara was transferred to the 35th Infantry at Schofield Barracks, Hawaii, where he served until June 1933. He was then assigned as a company commander with the Civilian Conservation Corps at Alexandria, Louisiana. He entered the Infantry School in September 1933, and graduated the following June. Afterwards he attended the Quartermaster Subsistence School in Chicago, and graduated from there in June 1935.

General McNamara then became Subsistence and Sales Commissary officer at Fort McPherson, Georgia, and in July 1936, was named sales officer at Fort Devens, Massachusetts. In August 1937 he officially transferred into the Quartermaster Corps.

General McNamara performed extremely valuable service on the European continent throughout the remainder of World War II. From D-Day on units under his command supplied a minimum of 12 divisions on the continent and provided services which would have been deemed impossible a generation earlier. The German counterattack in December 1944 (better known as the “Battle of the Bulge”) became something of a personal matter to General McNamara. He sensed that the enemy’s immediate objective was to seize as much as possible of the Allies’ supplies — especially gasoline. McNamara’s First Army quartermasters responded with a spirit and enthusiasm which reflected credit upon the QMC as a whole. On one notable occasion, for instance, they successfully evacuated more than 3,000,000 gallons of gasoline in three days. By