Back to List
LTG Billy K. Solomon
Class of 2010 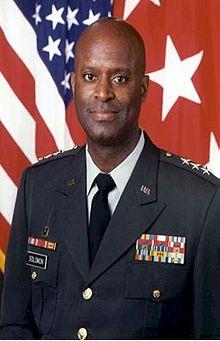 General Solomon was born in Fairfield (Oakwood), Texas on 16 November, 1944. In 1966, he graduated from Prairie View A&M University with a Bachelor of Science Degree in Agriculture, and was commissioned a Second Lieutenant in the Quartermaster Corps through the University ROTC Program. He later went on to receive a Master of Science Degree from the Florida Institute of Technology in contracting and acquisition management.

General Solomon is married to the former Cathym Jefferson, also from Fairfield, Texas and a graduate of Prairie View A&M University. They have two children, a son-in-la\v, and two Grand Chi ldren.