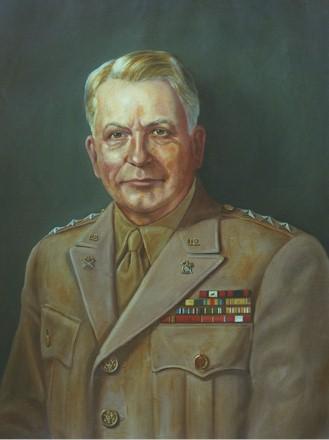 Edmund B. Gregory was born at Storm Lake, Iowa on July 4, 1882.  He graduated from the United States Military Academy, West Point, New York on June 15, 1904 with a commission as a 2nd Lieutenant of Infantry. After graduation he served with the 14th Infantry Regiment in the Philippines (November 1904-April 1905), at Vancouver Barracks, Washington (April 1905-January 1908), again in the Philippines (February 1908-February 1910) and Fort William Henry Harrison, Montana (February 1910-July 1911).

He served as an instructor in the Department of English and History, United States Military Academy (1911-12).  He rejoined the 14th Infantry at Fort Lawton, Washington and was sent to the Philippines for his third tour (1912-15) with the 8th Infantry through March 1916, then 27th Infantry through December 1916.  He was Assistant to the Quartermaster, Headquarters Philippine Department, Manila until July 1917.  Returning to the United States he was assigned as Assistant to Supply Officer at the General Supply Depot, Jeffersonville, Indiana (1917-21).  He performed duties as Assistant Quartermaster Supply Officer, Atlanta General Intermediate Depot (1921-22).  He then transferred to the Sales Branch, Office of the Assistant Secretary of War until August 1922.

From September 1922 to May 1924, he served in Shanghai, China as War Department representative in connection with cooperative union contracts with the United States for sale of war supplies.  From May 1924 to October 1924 he served on temporary duty in the Office of the Assistant Secretary of War.

As Quartermaster General during World War II, General Gregory was responsible for the development, procurement, distribution of billions of dollars’ worth of equipment and supplies.  He supervised the training of thousands of Quartermaster soldiers and controlled more than 90,000 military and civilian personnel.  Over 900,000 personnel were employed by contractors under his supervision.  General Gregory made the following pledge to the individual combat soldiers that the Quartermaster Corps supported, “Let me make this simple promise to the American people.  The Quartermaster Corps will never fail you boys!  We will deliver the goods.  Wherever they go–to whatever point American fighting men penetrate–Quartermasters will be by their side to “Keep ’em Rolling to Victory!”