Back to List
LTG John D. McLaughlin
Class of 1991 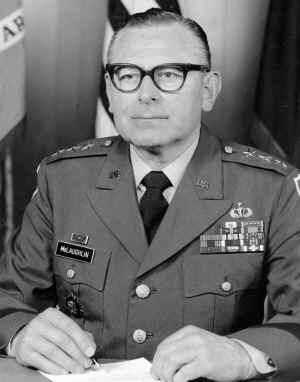 General McLaughlin became synonymous with the high quality of Army Food Service because of his initiatives that included establishing courses for Army cooks and bakers, building a world-class culinary Arts Team and establishing a British exchange program. He was an enlisted soldier in the Army in the 1930s who rejoined civilian life to complete his education and was called back at the onset of World War II. He became the Army’s youngest division Quartermaster and participated in five major campaigns.