Back to List
LTG John M. McDuffie
Class of 2008 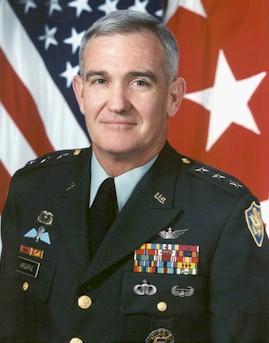 General McDuffie was commissioned as an Infantry Officer in February 1970 and commanded both Infantry and Aviation units (including a combat tour as a Cobra pilot in Vietnam) before transferring to the Quartermaster Corps in 1987. A proven leader in Logistics, he commanded some of the finest combat service support units in the U.S. Army – to include the 561st Supply and Service Battalion, Fort Campbell, Kentucky; the 101st Division Support Command, also at Fort Campbell; the 1st Corps Support Command, XVIII Airborne Corps, Fort Bragg, North Carolina; and from 1996 to 1998, served as Director, J-4, United States European Command in Germany.

General McDuffie’s 31 years of service culminated as the Director of Logistics, J4, The Joint Staff. It was in this position that he demonstrated his most lasting contribution to the Quartermaster Corps. He was relentless in his pursuit of increased efficiency of the logistics systems and the joint interoperability of logistics between the military services. He oversaw the development of policies and procedures that continue to be used in logistic systems today.