Back to List
LTG Joseph S. Laposata
Class of 1994 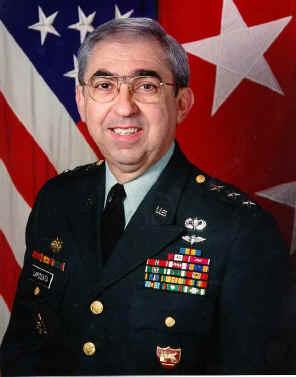 General Laposata was commissioned a Second Lieutenant in the United States Army after receiving a Bachelor of Science Degree in Biology from Indiana University of Pennsylvania. He also holds a Master of Science degree in Agricultural Economics from Cornell University. His military education includes the Industrial College of the Armed Forces and the U.S. Army Command and General Staff College.

He held many key command and staff positions within the military His key assignments include Chief of Staff of the Southern European Task Force in Vicenza, Italy; Deputy Chief of Staff for Logistics, U.S. Army Europe and Seventh Army; and Commanding General, U.S. Army Materiel Command – Europe.

General Laposata’s contributions to the Quartermaster Corps are numerous. He is the only Quartermaster officer to assume a Chief of Staff position in a North Atlantic Treaty Organization Command. However, his most significant contributions came while serving as the Deputy Chief of Staff for logistics at U.S. Army Europe Headquarters in Heidelberg, Germany, where he directed the deployment of the Seventh U.S. Army Corps to Operation Desert Storm Operation Desert Storm in Southwest Asia.