Back to List
LTG Walter J. Woolwine
Class of 1997 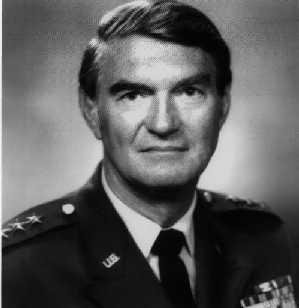 General Woolwine was commissioned Second Lieutenant in the Quartermaster Corps after graduation from the United States Military Academy at West Point in 1941.

General Woolwine served in The Office of the Quartermaster General in Washington, the Deputy Chief of Staff for Logistics, and the Assistant Secretary of the Army for Installations and Logistics. He was a Company Commander in the 84th Infantry Division during World War II, and at the end of the war became Chief of the Procurement Division in the European Theater Headquarters. In 1965 he went to Thailand as Commanding Officer of the 9th Logistical Command. After a tour of duty with the Army Materiel Command in Washington, he returned to the Far East in 1970. Initially assigned as Commanding General of the 1st Logistical Command – the largest single unit in Vietnam – he was later designated Assistant Deputy Commanding General, United States Army, Vietnam. After his promotion to Lieutenant General in August 1971, he was named Director of Logistics (J4), Joint Chiefs of Staff. In his last assignment before retirement in 1975 he was Commandant of the Industrial College of the Armed Forces in Washington, DC.

During his 34-year career which included participation in three wars, World War II, Korea, and Vietnam. General Woolwine served in every phase of Quartermaster activities at every level and achieved lasting results throughout the realm of military logistics.