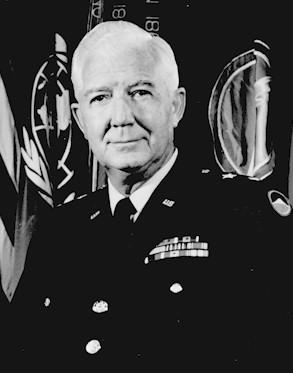 General Kendall graduated from the University of Arkansas in 1933, and was commissioned through ROTC as a Second Lieutenant with the Infantry-Reserve. For the next seven and a half years he served with the Civilian Conservation Corps (CCC), and at 22-years-old was the country’s youngest CCC Camp Commander.

In World War II, General Kendall served in consecutive assignments at the Kansas City Quartermaster Depot, San Antonio General Depot, and Utah General Depot where he pioneered the use of electronic accounting machines and forklifts in depot operations. In 1945 he joined the staff of The Quartermaster General in Washington where he helped redesign the postwar depot system. From 1946 to 1949, General Kendall served as the Eighth US Army Quartermaster for General Douglas MacArthur. This entailed support of the 1st Cavalry, 11th Airborne, 24th and 25th Divisions, all other Army, Air Force, Navy, State Department civilian personnel; supervision of the Tokyo and Kobe Depots; establishment of 35 commissaries and a hydroponic farm; construction of three milk plants and housing for over 20,000 dependents. No one contributed more to the occupation effort.

General Kendall served as Director of Supply at the newly created Defense Supply Agency (1965); Deputy Commander of the U.S. Army in the Ryukyu Islands, Japan (1966-67); Commanding General of the U.S. Army, Japan (1967-68); and Deputy Commandant of the Industrial College of the Armed Forces (1968-70) before retiring on 1 August 1970, at the end of 37 years of active service to the nation and the Quartermaster Corps.