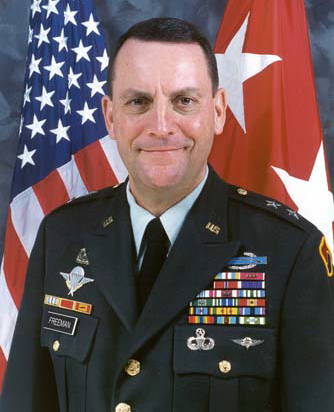 General Freeman entered active duty in 1969 at Fort Benning, Georgia as a Second Lieutenant. He holds a Bachelor Degree in History from Lafayette College, and a Master’s Degree in Latin American Studies from the University of Alabama. General Freeman is a graduate from the Infantry Officer Basic Course, Quartermaster Officer Advanced Course, Mexican War College, United States Army School of the Americas, and the United States Army War College.

Over the course of his outstanding military career, General Freeman distinguished himself in a variety of challenging and critical assignments in both continental United States and overseas units as a dedicated Quartermaster Officer, to include service in Vietnam as both an Infantry and a Quartermaster Officer.