Back to List
MG Cecil W. Hospelhorn
Class of 2000 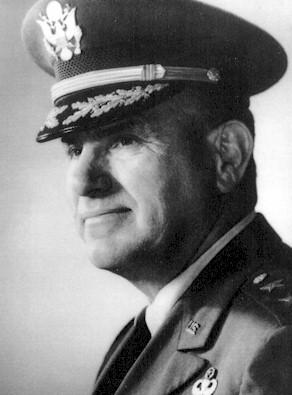 General Hospelhorn was born in Hudson, Illinois, on 3 January 1921, and began his military career as an Infantry private in 1943. He graduated from Engineer Officer Candidate School at Fort Belvoir, Virginia, in 1944, and from there served as a platoon leader and company commander with the 869th Engineer Aviation Battalion in the Pacific.

General Hospelhorn was a much acclaimed pioneer in aerial resupply, and spent most of his early career with airborne units and in other aerial resupply assignments. During the Korean War, he commanded the 2348th Airborne Air Supply and Packaging Company (later redesignated the 8081st) – a company that led the Army in delivering fully assembled heavy equipment such as 2 ½-ton trucks and bulldozers, and other heavy components by air. In December 1950, the 8081st made history by delivering eight sections of M-2 bridging, weighing 4500 pounds each, to the encircled First Marine Division. Using the bridge, the Division withdrew to the Hungnam Port and avoided possible annihilation.

General Hospelhorn had many other important command and staff assignments during the remainder of his 29 years on active duty. He served as an instructor and assistant director of the Airborne Group here at Fort Lee in its earliest days, and was a special assistant for airborne matters at the Natick Research and Development Laboratories. He was Division Quartermaster for the 24th Infantry Division in Europe (1962-64); and later commanded the 26th General Support Group in Fort Lewis, Washington, and in Vietnam; the Safeguard Logistics Command in Huntsville, Alabama; the European Exchange Service in Germany, and the Army and Air Force Exchange System in Dallas, Texas.

General Hospelhorn was awarded numerous decorations and has been described by Army senior leaders past and present as the “best of the best,” and a “soldier’s soldier”.