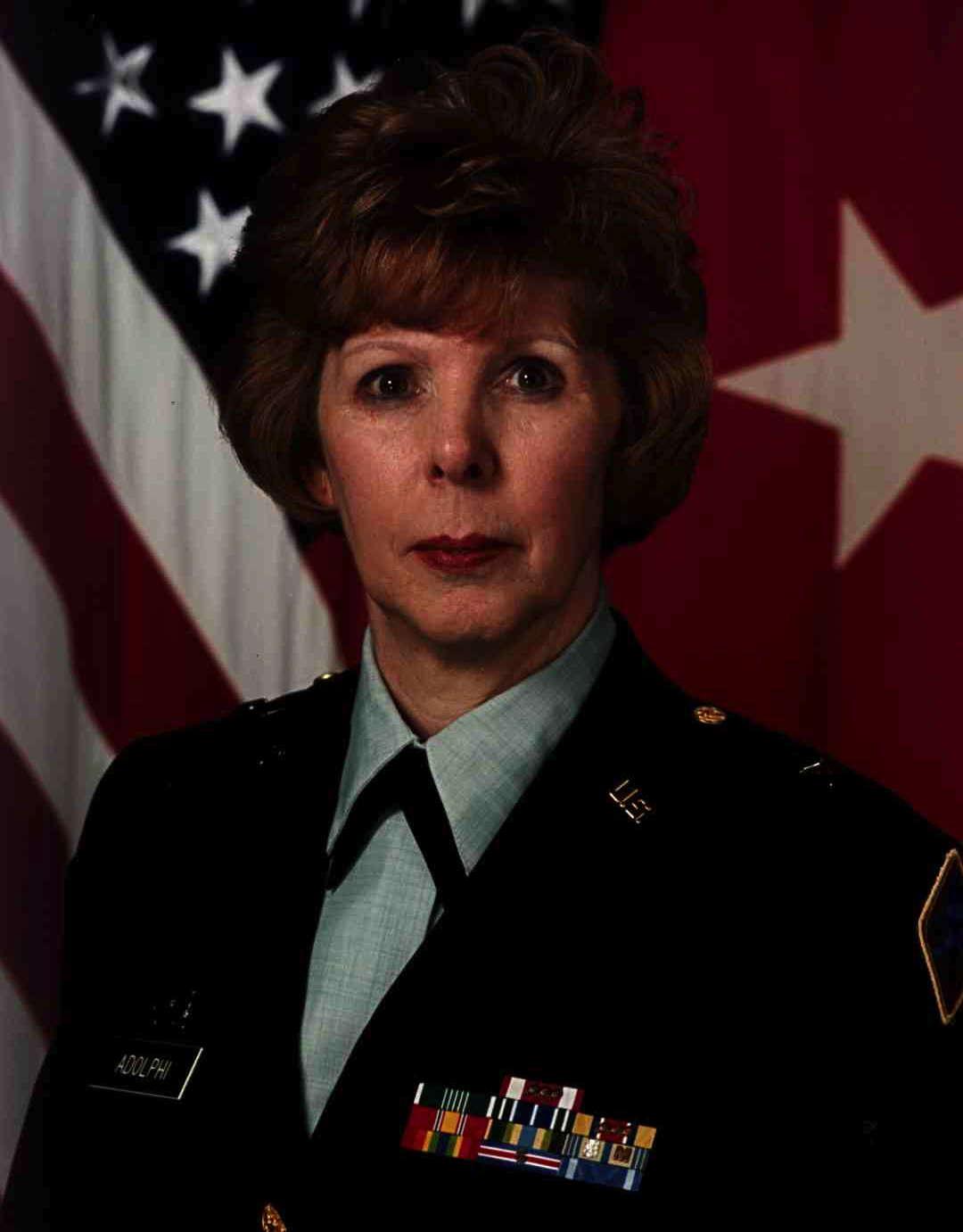 Major General Celia Adolphi made numerous contributions in multiple facets of Army logistics, while also pioneering the role of women in the armed forces. MG Adolphi entered the US Army Reserve with a direct appointment as a captain and was assigned to the 310th Theater Army Area Command at Fort Belvoir.  She quickly established a reputation thorough, efficient staff work, which resulted in assignments of increasing importance.  During her work in the Materiel and Services Directorates she developed a specialty in the critical work of developing war plans, while contributing her expertise in the food services arena.  She served as both the Director of Services and Materiel in the 510th Area Support Group during the extremely difficult task of de-activating the organization.

Having demonstrated her exceptional leadership skills, she was selected to command the 55th Materiel Management Center, another subordinate organization for the 310th TAACOM. This was a time when women at a 06 command position was unusual; and she was the first woman to hold this command.

The 55th MMC deployed the bulk of its personnel to Kaposvar, Hungary in support of Operation Joint Endeavor.  In this operation, American forces participated in the multinational peacekeeping operations in Bosnia.  Logistically this was a highly challenging environment because of the lack of American infrastructure and the overland supply lines.  The necessity to minimize the American logistical footprint made the job that much more difficult.  Colonel Adolphi’s keen insights and her leadership style made the materiel management portion of this operation a remarkable success.

With her distinguished record she was selected to become the Deputy Commanding General for Mobilization at the US Army Quartermaster Center and School at Fort Lee.  This marked the first time that a woman was selected for general officer in a logistical branch of the Army Reserves.  During this assignment, Brigadier General Adolphi was instrumental in advancing common training standards between the active Army and the Reserve Components.  This work laid the foundation for improved integration of reservists in the crises that came in the following decade.

Her military career culminated in her selection as the Deputy Mobilization Assistant to the Director, J-4/Director of Operations, Logistics Readiness Center.  This promotion marked the first time a woman reached two-star rank in the Army Reserve.  In this position her leadership was exemplary during normal operations, but especially noteworthy when while overseeing Combat Operations out of the National Military Command Center.  MG Adolphi was deeply respected by the J4 team and the rest of the Joint Staff leadership. She was considered one of the true “Logistics Experts” by the Chairman of the Joint Chiefs of Staff. She represented the J4 in many very senior forums at the Combatant Commands, Office of the Secretary of Defense and with the Military Services, leading to the highest praise from the J4.