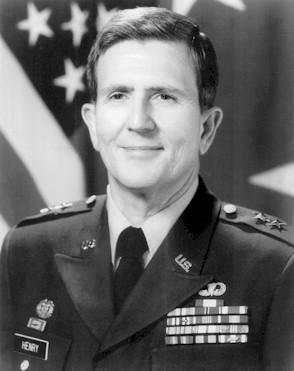 Throughout his career of nearly 33 years, General Henry held a variety of important Quartermaster, mission-related, command and staff positions – from small units in the field to the large Defense Contracting Management Command, a joint Department of Defense agency. Overseas assignments included tours in Vietnam, Europe and Saudi Arabia. During the 1980s he served four times in the Defense Logistics Agency, most notably as an Acquisitions and Contracting expert. He was also selected to become the Army’s first Competition Advocate General (a position newly established by Congress), where he reported directly to the Secretary of the Army. He reduced Army costs by 30 percent and increased competitive contracting from 38 percent to 65 percent.

Many of the creative policies and contracting procedures he established while serving as a Quartermaster Officer have become institutionalized nation’s and the Corps’ betterment.