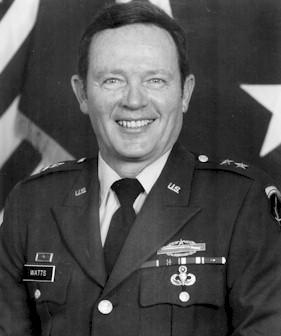 General Watts enlisted in the Army in 1946. He served in the 82nd Airborne Division as a Pathfinder and Demolitionist. Using the GI Bill, he graduated from the University of Connecticut and was commissioned second lieutenant through the Reserve Officers’ Training Corps.

His early assignments included combat duty in the Korean War as a Platoon Leader with the 179th Infantry Regiment, 45th Infantry Division; a stateside tour with the 9th and 69th Infantry Divisions and a European tour with the 10th Special Forces Group where he gained experience with British, French and Greek Special Operations units. Following service with Third US Army Headquarters, he joined Okinawa-based 1st Special Forces Group, participating in operations in Korea, Taiwan and Vietnam. In 1967 be returned to Vietnam to command the “Big Red One’s” 1st Supply and Transport Battalion. He would later command the 1st Cavalry Division Support Command at Fort Hood and the 200th Theater Army Materiel Management Command (Germany). Between 1983 and 1986, he was assigned as the J-4/7 of the newly-formed US Central Command at MacDill Air Force Base, Florida, where he led logistical, construction and military assistance efforts for all US defense matters in Southwest Asia.

Major General Watts is a “Logistics Warrior” whose heroic service earned for him two Bronze Stars, two Purple Hearts, two Combat Infantry Badges, and both the US Army and Defense Distinguished Service Medals.