Back to List
MG Dean Van Lydegraf
Class of 2000 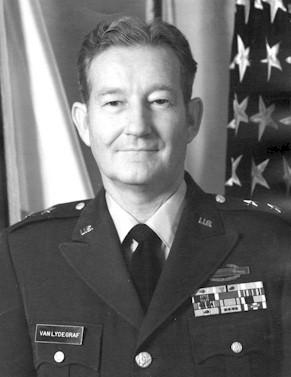 General Van Lydegraf graduated from the University of Oregon in 1944, the same year he completed Officer Candidate School at Fort Benning, Georgia, and was commissioned second lieutenant in the Infantry. He immediately joined the 301st Infantry Regiment, 94th Infantry Division, and accompanied the unit to the European Theater of Operations in August 1944. He stayed with the 301st for the remainder of World War II, while participating in four separate campaigns, first as a platoon leader and later on the regimental staff. In February 1945 he was wounded in action near Nennig, Germany, in the Saar-Moselle Triangle.

In 1947, General Van Lydegraf was commissioned a first lieutenant Regular Army and was transferred to the Quartermaster Corps. Following completion of the Quartermaster Officer Basic Course, he served in Panama until 1950 as a Company Commander and Depot Supply Officer at the Corazal General Depot, and as a logistics officer in the J-4 Office, Headquarters, Caribbean Command. He graduated from the Quartermaster Officer Advanced Course in December 1952, earned a Masters Degree from Babson Institute, Wellesley, Massachusetts in 1954, and served for the next two years as a supply staff officer with Headquarters Korean Communications Zone and later with the Eighth Army in Korea.

In 1967, General Van Lydegraf became Chief of Staff and later Deputy Commander of Cam Ranh Bay Support Command in Vietnam. Upon his return to the U.S. in 1968, he assumed command of the Atlanta Army Depot, and in 1970, after being promoted to Brigadier General, he commanded Natick Laboratories in Natick, Massachusetts. He was promoted to Major General in March 1972 and served for one year as Deputy Chief of Staff for Logistics, USARPAC – before starting his last active-duty assignment as Commander, U.S. Army Quartermaster Center and Fort Lee, from March 1973 until retirement in 1977.