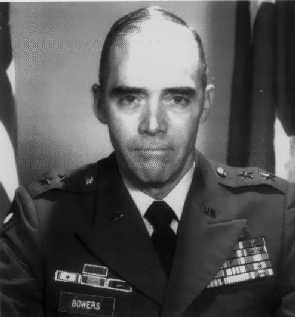 General Bowers graduated as a Reserve Officers’ Training Corps honor graduate from Mercer University in 1951 and was commissioned a second lieutenant in the Quartermaster Corps. During the early years in his career, he was detailed to the Artillery Corps. Serving in Korea with the 2nd Division Artillery, he was wounded in action in 1952 during the Second Korean Winter Campaign.

Among his many lasting contributions, General Bowers expedited movement of the communications zone from France to Germany, Belgium and Luxembourg, that was key to North Atlantic Treaty Organization success over the last two decades. Plus, he conducted a thorough study of Department of Defense commissary operations that led to many reforms.