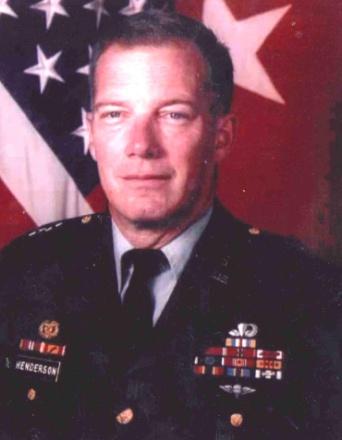 Major General Frank Henderson was commissioned in the Quartermaster Corps through ROTC at the University of Texas in 1964.  Following the Quartermaster Officer Basic Course, he served as an instructor at the Quartermaster School.  General Henderson deployed to the 101st Airborne Division, U.S. Army, Viet Nam, and served consecutively as the Assistant Supply Officer of the 1st Brigade Support Battalion, the Operations Officer of the 1st Brigade Forward Support Element, and finally as Commander, Company C, 1st Brigade Support Battalion.  He completed the Quartermaster Officer Advanced Course and obtained a Masters Degree in Business Administration from the University of Georgia.  He returned to Viet Nam and served as a Division Chief in the U.S. Army Depot at Da Nang.  Upon returning stateside, he served as an Instructor of Operations Research/Systems Analysis at the U.S. Army Logistics Center, Fort Lee.  In succession, he completed the resident course at the US Army Command & General Staff College and the Canadian Forces Command & Staff College in Toronto.  Major General Henderson was assigned to the Army Staff and served as a Military Plans Officer and Operations Research Systems Analyst in the Office, Chief of Staff, United States Army.  Major General Henderson completed his Pentagon tour as Executive to the Director of the Army Staff, Office, Chief of Staff, US Army.

General Henderson was assigned to the 3rd Armored Division, where he served consecutively as the Commander, Material Management Center, Division Support Command, and as the Commander, 503rd Supply & Transportation Battalion.  He was reassigned to Fort Hood, Texas, where he served as Assistant G-4 and later as G-4 of the III US Corps.  He later became Director of Program Integration, Office of the Commanding General, III Corps.  Following graduation from the US Army War College, General Henderson assumed command of the Division Support Command, 24th Infantry Division.  He was then given a second Colonel-level command as Commander of the newly-activated 7th Theater Army Area Command, US Army Europe, where he was instrumental in establishing the logistics infrastructure necessary to support III Corps should it be deployed from Fort Hood, Texas, as part of NATO reinforcements.  As a complementary action, his wife, Penny Lee, received US Army Europe recognition for establishing, leading, and exercising the 7th TAACOM Noncombatant Evacuation Order program without the assistance of military personnel.

Upon selection for Brigadier General, General Henderson was assigned as the Deputy Commanding General, Army Munitions Command, where he was responsible for shipping all ammunition which was used to support Operation Desert Storm, as well as the collection, cleaning, repackaging, and shipping of all unused, serviceable ammunition back to CONUS.  He was subsequently transferred to Korea, where he served as G-4, Eighth Army/J4, US Forces Korea, where he finalized the transfer of the US-owned Trans-Korea Pipeline to the South Korean government, thereby strengthening the Korean role in providing logistics to all United Nations troops on the peninsula.  His final assignment was Deputy Chief of Staff for Logistics, U.S. Army Materiel Command, where he strongly influenced the extensive planning which changed the role of AMC from primarily wholesale logistics into a logistics support force completely integrated into the support structure of every forward-deployed Army combat formation.