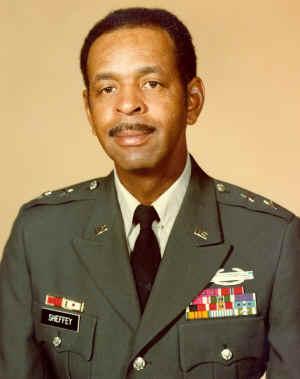 General Sheffey was born in McKeesport, Pennsylvania on 27 August 1928. He received a Bachelor of Science Degree in Economics from Central State University, Wilberforce Ohio in 1950.  He was commissioned as a Second Lieutenant in the Infantry after his graduation as a Distinguished Military Graduate from the ROTC program. His advanced education includes a Master’s Degree in Business Administration from Ohio State University, a Master’s Degree in International Affairs from George Washington University, and he is a graduate of the National War College.

General Sheffey’s command experience includes three combat tours: the first in Korea with the 25th Infantry Division as an Infantry Company Commander (1950); Battalion Commander of the 266th Quartermaster Battalion in Vietnam (1966); and command of the 54th General Support Group in Vietnam (1971). While in Korea, he was wounded in a battle documented in the 1953 book, “Back Down the Ridge”, by W.L. White.  The damage to his upper right hip resulted in 18 months of hospitalization and three major operations. On September 29, 1977, General Sheffey became the first African-American officer to command Fort Lee, the Quartermaster Training Command, and the Quartermaster School.

Among General Sheffey’s numerous contributions to the Quartermaster Corps are his creation and implementation of Army wide training strategies for supply storage, distribution, maintenance and accountability. As the Director of Financial Management, he was responsible for programming, budgeting and justifying the Army’s logistical budget of over $5 billion dollars annually to both the Pentagon and Congress. Finally, as the Commander of Fort Lee, he planned and implemented many programs that enhanced the welfare and morale of service members and their family members.

Upon retirement from the Army on 1 August 1980, General Sheffey moved to North Texas and worked for Lockheed Martin, Inc. He retired from Lockheed in January 2000. General Sheffey died 25 July 2000 at his DeSoto, Texas home of lung cancer.  His funeral was held on 10 August 2000 at Fort Meyer Post Chapel and he is buried in Arlington National Cemetery.