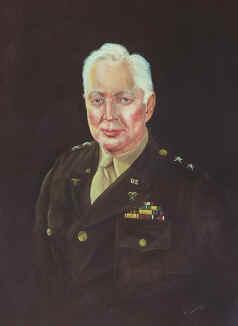 George Anthony Horkan was born July 1, 1894, in Augusta, Georgia and died November 2, 1974. He graduated from Georgetown University, Washington, DC with a Bachelor of Arts degree in 1915, and served as battalion Sergeant Major, 1st Infantry, Georgia National Guard, from July to October 1916. He was appointed a Second Lieutenant, Infantry Reserve, August 15, 1917, and on October 26, 1917 was commissioned a Second Lieutenant, Infantry in the Regular Army.

General Horkan served with the 55th Infantry at various stations in the United States and in September, 1918, sailed with his regiment to France where he participated in the occupation of the Puyenelle Sector and in the Second Army Offensive. Upon return to the United States in June, 1919, he was stationed with the 55th at Camp Funston, Kansas, as regimental supply officer.

In January 1924, he entered the, Babson Institute, Babson Park, Massachusetts, and following his graduation in March, 1925, was assigned to duty in the Office of the Assistant Secretary of War and placed in charge of the Statistical Section.

In October 1928, General Horkan was sent to France in charge of construction of certain monuments being erected by the American Battle Monuments Commission. In July 1929 he was stationed at Paris in direct charge of the Monument at Montfaucan, France. In August, 1931, he returned to the United States to enter the Army Industrial College.   Following graduation in June 1932, he was assigned to the New Orleans Quartermaster Depot as Assistant Procurement and Planning Officer.

General Horkan was a veteran of both World Wars and served as Quartermaster General during most of the Korean Conflict. He received many awards during his 37 years of service, including:

The Distinguished Service Medal, Army Commendation Medal (with one Oak Leaf Cluster), Korean Taegak Distinguished Military Service Medal. In addition he was awarded the Army’s Medal for Humane Action for participation in the Berlin Airlift and a special Distinguished Service Award by Georgetown University.  He was initiated into the National Society of Pershing Rifles and also into the National Society of the Scabbard and Blade at Mercer University, Macon, Georgia.