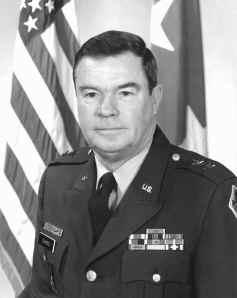 General Dukes’ last command before his retirement in 1984 was Quartermaster General and Commander of Fort Lee, Virginia.  Among General Dukes’ numerous contributions to the Quartermaster Corps were his development of a Family Advocacy Program and a Family Center that became the model for the entire Army during the “Year of the Family.” General Dukes was also responsible for upgrading the Quartermaster Officer Basic Course to include leadership training for advanced individual training companies of the Quartermaster Brigade. While commanding AAFES-Europe, he was responsible for increasing sales by 20 percent at 4,500 retail outlets that generated more funds for morale, welfare and recreation programs throughout the joint services.