Back to List
MG Hawthorne L. Proctor
Class of 2007 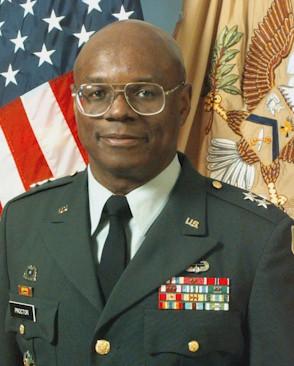 General Proctor received his commission in 1968 as a distinguished military graduate from North Carolina Agricultural and Technical State University where he earned a bachelor’s degree in Agricultural Economics.  He received a master’s degree in Public Administration from Central Michigan University in 1976.  His military schooling includes the Quartermaster Basic and Advanced Courses, the Command and General Staff College, the Army War College, and Executive Management Development Training at the University of California at Berkeley.

Prior to assuming battalion command, he served in a variety of career building assignments including duty as a Logistics Staff Officer, Office of the Deputy Chief of Staff for Logistics, Department of the Army.  Following attendance at CGSC, he served as Materiel Management Officer, Combined Field Army (Republic of Korea/US), Uijongbu, Korea.  As a company grade officer, he served at Fort Ord, California, as Platoon Leader and Assistant Brigade S-4; Contact Team Leader (Military Assistance Command Vietnam) in Nha Trang and Quinhon, Republic of Vietnam; Commissary Officer, Bangkok, Thailand; and Commander, Company A, 25th Supply and Transportation Battalion.  Upon completion of his initial assignment with the 25th Infantry Division, he served as Chief Production Management Branch, Defense Industrial Supply Center, Philadelphia, Pennsylvania.

General Proctor was inducted as Distinguished Member of the Quartermaster Regiment in 1994.