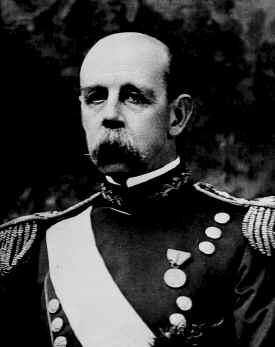 Henry Granville Sharpe was born at Kingston, New York on April 30, 1858. He graduated from the U.S. Military Academy in 1880. Sharpe served on frontier duty with the 4th Infantry at Fort Laramie, Wyoming for the next year and a half. Following a six months’ leave of absence, he submitted his resignation from the Army to take effect June 1, 1882.

About fifteen months later on September 12, 1883, Sharpe was reappointed to the Army as a commissary of subsistence with the rank of Captain and assigned to temporary duty at New York City.  He was then stationed at West Point 1884 to 1889.

From 1889 to 1898 he served as a commissary officer at various locations to include Washington, Oregon and the St. Louis Depot. He was promoted to the rank of Major on November 13, 1895. He transferred from St. Louis to Boston on March 15, 1897, but assumed his duties there only after he had purchased and distributed supplies for the relief of sufferers from the Mississippi flood at St. Louis, Missouri and at Cairo, Illinois.

When war with Spain was imminent in April 1898, he was appointed chief commissary of the First Army Corps, and deployed with the Corps to Puerto Rico. There he was promoted to Lieutenant Colonel and appointed an assistant commissary general of subsistence. He remained on duty in Puerto Rico until December 21, 1898.

For a short time he was assigned to the Chicago Depot as purchasing commissary general, but in September of 1899 he was ordered to Washington to act as assistant to the Commissary General of Subsistence. This assignment lasted until the spring of 1902. He was then sent to Manila as chief commissary of the Division of the Philippines. By that time he been promoted to the rank of Colonel and was the senior officer in the Subsistence Department.

Sharpe’s tour of duty in the Philippines lasted until he was again recalled to Washington to act as assistant to the Commissary General of Subsistence. He served in this capacity from June 22, 1904, to October 8, 1905. He was commissioned Commissary General of Subsistence with the rank of Brigadier General on October 12, 1905 and was reappointed for a second four-year detail in 1909.

In the summer of 1907 he sailed to Europe at his own expense to investigate the supply departments of the British, French, and German armies. He visited the schools for bakers and cooks maintained by those armies. The data he obtained on the use of rolling kitchens in the French and German armies materially assisted in the development of similar equipment suitable for the U.S. Army.

Upon his return to Washington in September 1907, General Sharpe submitted recommendations to the War Department urging the establishment of a supply corps. While these were not adopted, they undoubtedly proved helpful when the subject of consolidating the Quartermaster, Subsistence, and Pay Departments into one agency was being considered four years later. Sharpe was so enthusiastic about establishing a consolidated supply corps that Quartermaster General James B Aleshire called him the ”father of consolidation.” Many of Sharpe’s friends recommended that he be selected to head the newly created Quartermaster Corps in 1912.  But when his classmate, General Aleshire, was appointed, Sharpe accepted a subordinate post in the Corps and worked devotedly to prove the value of consolidation.

When ill health brought General Aleshire’s retirement four years later, General Sharpe was appointed to succeed him as Quartermaster General on September 16, 1916. This was approximately seven months before the United States declared war against Germany.

The Quartermaster Corps and the War Department generally were unprepared for World War I. The supply bureaus within the Quartermaster Corps were eager to procure and ship as quickly as possible the enormous quantities of supplies for which they were responsible. However, their uncoordinated procurement resulted in excessive and unbalanced railway shipments that overtaxed port facilities and finally developed into a serious congestion of the railroad system in the winter of 1917-18. By that time shortages in clothing, hospital equipment, and other supplies were causing hardships in Army camps, and it was charged by some that the lack of adequate clothing and shelter was responsible for an epidemic of pneumonia sweeping through the camps.

General Sharpe was held responsible by many for a large share of the supply crisis that had developed. It is, however, much easier and far more comforting to blame an individual than to analyze and evaluate the interplay of complex factors.

These developments stirred a widespread uneasiness that led to a Congressional hearing on the conduct of the war. In the end the General Staff took complete control of supplies and the Office of the Director of Purchase and Storage in the Purchase, Storage, and Traffic Division was erected on the foundation of the Quartermaster Corps.

In June 1918, General Sharpe was relieved from duty with the War Council and assigned to the command of the Southeastern Department. The following month he was appointed a Major General in the line of the Army, with rank from July 12 and officially ceased to be Quartermaster General.

General Sharpe requested retirement on May 1, 1920, he was then 62. In his later years he lived in Providence, Rhode Island., where he died at the age of 89, on July 13, 1947. He is buried at Arlington National Cemetery.