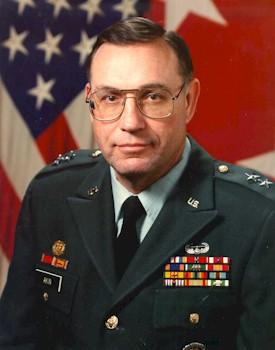 General Akin was born in Atlanta, Georgia. An ROTC graduate at North Georgia College, he was commissioned a Second Lieutenant in the U.S. Army in 1959. He would go on to serve for nearly 34 years of distinguished active duty service, almost all of it as a Quartermaster officer.

As Assistant Commandant, United States Army Quartermaster Center and School from 1984 to 1986, General Akin made truly substantial contributions to the training and leader development of Quartermaster officers and noncommissioned officers, and toward major improvements in combat developments. From 1986 to 1989, as a newly promoted Brigadier General, he served as the senior Quartermaster officer and principal logistics advisor to both the Army and Joint Forces Commanders in Korea. From there he took his final assignment as Director of Plans and Operations, Office of the Deputy Chief of Staff in Washington. There during Operation Desert Shield/Storm (1990-91) he ran the Army’s Pentagon Logistics Operations Center seven days a week for ten straight months – and so was personally involved in the largest and most rapid deployment since World War II.

Major General Akin is the recipient of numerous medals and awards and has been aptly described by a retired four-star general as “one of the Army’s great field soldiers and Quartermaster leaders.”