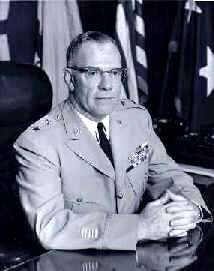 General Mackintosh was born 7 October, 1907 in Boston, Massachusetts. He was commissioned as a Second Lieutenant in the Infantry following his graduation from the United States Military Academy in 1929. His military education includes the Industrial College of the Armed Forces, and the United States Army Command and Staff College. General Mackintosh served with the Infantry during the first ten years of service and was detailed to the Quartermaster Corps in 1939.

General Mackintosh’s awards and decorations include the Distinguished Service Medal, Legion of Merit (two Oak Leaf Clusters), Croix de Guerre with Silver Star, Cross of the Brigadiers of the Royal Battalion of King George I, Honorary Commander of the Most Excellent Order of the British Empire, and Ulchi Distinguished Military Service Medal with Silver Star. General Mackintosh passed away on May 8, 1974.