Back to List
MG James B. Aleshire
Class of 1988 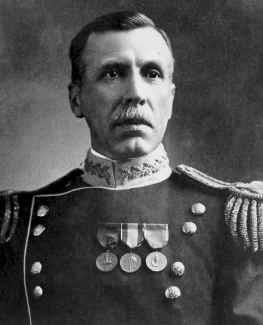 James Buchanan Aleshire, was born October 31, 1856, at Gallipolis, Ohio. He was appointed a cadet at the U. S. Military Academy in the summer of 1876. Upon graduation he was assigned as a Second Lieutenant to the First Cavalry, joining it at Fort Bidwell, California. General Aleshire served at frontier posts in California, Arizona, Wyoming, Montana, Kansas and Washington.  In addition to the usual troop duties, Aleshire filled various staff positions at these posts, such as acting assistant Quartermaster, assistant commissary of subsistence, and post adjutant. He was promoted to First Lieutenant on September 20, 1890.

He applied for transfer to the Quartermaster’s Department in the spring of 1894. He was appointed an assistant Quartermaster with the rank of Captain on April 25, 1895. His Cavalry service had given him much experience in handling horses and in dealing with supply problems. He was employed in his new rank as a horse buyer, assigned to the General Depot at St. Louis. About a year later he was transferred to the Chicago Depot, where he continued to purchase and inspect horses for Cavalry and Artillery use.   Sympathetic with the needs of the mounted services, he was later responsible as Quartermaster General for the establishment the Remount Service, which inaugurated a new system of purchase and supply through a number of remount districts and depots.

When the Boxer Rebellion broke out in China in May 1900, Colonel Humphrey, who had been assigned Chief Quartermaster of the U. S. Relief Expedition, requested the services of Aleshire. He arrived at Tientsin on October 12, and was assigned as depot Quartermaster. Once the trouble in China was over, he was sent to Manila, Philippines and placed in charge of organizing the Army Transport Service. In the meantime he had been promoted to Major in the Regular Army. By March 1903 he was designated Depot Quartermaster at Manila.

Secretary of War Taft appointed General Aleshire to the post of Quartermaster General on July 1, 1907. During the nine years of Aleshire’s administration many changes in methods and organization were introduced. One of his first accomplishments was to institute a system to decentralize the procurement of supplies in place of the centralized control of supply that had developed in the Department during the years of peace following the Civil War.

This system was based on an analysis of the appropriation act and the budgeting of funds. One of the important and far-reaching innovations introduced by General Aleshire was to itemize his estimates by appropriation to enable him to explain to the Appropriation Committee of Congress just what was wanted and why. This practice of itemizing estimates is followed in the preparation of budgets today, but General Aleshire was the first bureau chief of the War Department to do it.

General Aleshire’s first four-year detail expired June 30, 1911, and he was reappointed Quartermaster General for another four years. The major issue under consideration at that time was the creation of a new supply corps by consolidating the Quartermaster, Subsistence and Pay Departments. General Aleshire took an active part in the discussions and hearings that paved the way for the eventual passage of the law establishing the Quartermaster Corps on August 24, 1912. General Henry G. Sharpe, then Commissary General of Subsistence, had pioneered in the efforts to promote consolidation, and as it became apparent in the summer of 1912 that passage of such legislation was assured, it also became clear that either Aleshire or Sharpe would be appointed to head the new corps.

Aleshire had an excellent record as Quartermaster General and although Sharpe had the advantage of two years, President Taft nominated Aleshire as Chief of the newly created Quartermaster Corps, with the rank of Major General to date from August 24, 1912, for a period of four years.

In consolidating the departments, Aleshire followed the same policy instituted earlier of decentralizing authority to officers in the field. The office itself was organized into five divisions with General Aleshire directly supervising the Administrative Division, which included personnel, General Sharpe taking charge of Supply and former Paymaster, General Smith, heading the Accounting Division. Transportation and construction were each set up as divisions, headed by officers with the rank of Colonel.

The work was difficult and affected General Aleshire’s health, he fell seriously ill in February 1916. General Aleshire was again appointed Quartermaster General for a four-year term beginning August 24, 1916. However, medical examiners were convinced that his health would rapidly grow worse if he reassumed the laborious duties of his office. Aleshire was disappointed but accepted their decision, he retired on September 12, 1916.

Six months later, he recovered and offered his services in any capacity to the Government. He was appointed to the Council of National Defense, and on June 6, 1917, he was officially recalled to active service to assume the chairmanship of the Priority Committee of that Council serving until July 12, 1918.

General Aleshire retired to the home he established at Sheridan, Wyoming near the scenes of his military service on the plains he so well loved. He died June 1, 1925, at the age of 68. He was buried at Arlington National Cemetery on June 8.