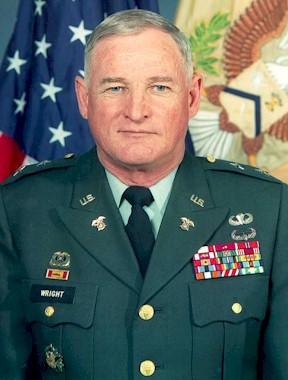 General Wright was born on 10 August 1944, in Houston, Texas. After attending Officer Candidate School, he was commissioned a Second Lieutenant in the Quartermaster Corps. His education includes a Bachelor’s Degree in Business Administration from the University of Nebraska at Omaha, and two Master’s Degrees, in Procurement and Contracting as well as Business Administration, both from the Florida Institute of Technology. His military education includes the Quartermaster Officer Advanced Course, the United States Army Command and General Staff College, and the United States Army War College.

In August 1995 General Wright was assigned as Commander of the 21st Theater Army Area Command in Kaiserslautern, Germany. He was responsible for establishing the Intermediate Staging Base at Taszar in Southern Hungary, which would serve as the staging area for US/NATO peacekeeping efforts in Bosnia.  He oversaw the largest and most complex movement of US forces in Europe since the end of World War II. From December 11, 1995, to mid-February 1996, more than 24,000 soldiers, 200,000 tons of cargo and 12,000 pieces of equipment reached Hungary and subsequently Bosnia. This included 409 trips delivering 7,340 freight cars, 507 bus, 1,770 cargo trucks and approximately 750 C-17 cargo flights.

On 31 March 2000, the 1st Corps Support Command dedicated a parade/athletic field at Fort Bragg in his honor.  The street leading to the field was also renamed, “Wright Way”. On 17 May 2001 the Deployment Center at Rhine Ordnance Barracks in Vogelweh, Germany was named in honor of General Wright.  On 16 May 2002 the Advanced NCO Academy Barracks at Fort Lee was named in his honor.

“It has been a great ride, but it is time for this Texan to put my horse away and hang up my spurs. As I leave, let me remind you all of the immortal words of the late General Creighton Abrams, former Army Chief of Staff and my hero. He said: “What this country needs, it cannot buy. It needs dedicated soldiers who see service to their country as an affair of the heart.” I hope it is that way with you.”Major General James M. Wright
Quartermaster Professional Bulletin – Summer 1999