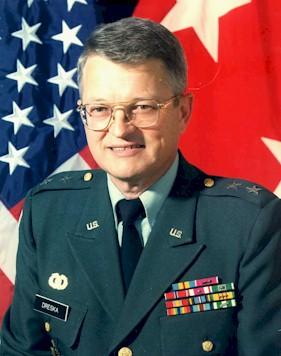 General Dreska graduated from the University of Notre Dame, South Bend, Indiana, in 1960, with a Bachelor’s Degree in Economics, and later earned a Master’s Degree in Business Administration from Tulane University, in New Orleans, Louisiana. He is a graduate of the Infantry Officer Basic course, Quartermaster Basic and Advanced Courses, Armed Forces Staff College, Industrial College of the Armed Forces and the CAPSTONE General Officer Course.

During his more than 32 years of active duty service, General Dreska held numerous key Quartermaster and logistics assignments in the United States and around the world. In the 1960s he served as a Post Quartermaster in Japan (1963-66) and a Supply and Logistics Officer in the Republic of Vietnam (1968-69). He commanded the 227th Maintenance Battalion (1978-79) and the 6th Support Center (1979-80), both with the 19th Support Command, 8th U.S. Army in Korea; later commanded the 2nd Support Command (Corps), VII Corps, U.S. Army Europe (1985-87).

General Dreska is a renowned expert in depot management. He commanded the New Cumberland Army Depot, New Cumberland, Pennsylvania (1980-83) and the Defense Construction Supply Center in Columbus, Ohio (1987-90). He also played an instrumental role in reforming and reorganizing logistics procedures here and abroad while serving with Army Materiel Command and in the Office of the Deputy Chief of Staff for Logistics. As the first Commander of the newly activated Defense Commissary Agency at Fort Lee, Virginia, from 1990 to 1993, Major General Dreska planned, directed and completed the merger of four separate and unique service commissary systems into one efficient worldwide agency – which has a positive and lasting impact on the lives of all services members and their families in the years since.