Back to List
MG Joseph P. Sullivan
Class of 2003 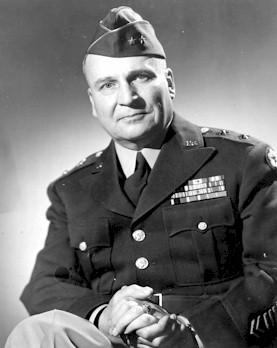 General Sullivan was born in San Francisco, California, on 7 January 1894. Upon his graduation from West Point in 1917, he was assigned to the 10th Infantry Brigade (along with his former classmate and lifelong friend Mark Clark). As an Infantry Captain in World War I, he participated in the battles of San Mihiel and the Muesse-Argonne, and was seriously wounded in October 1918.

For nearly a decade after the war, General Sullivan continued his service with the Infantry and the Coast Artillery, before formally transferring to the Quartermaster Corps as a Major in 1929. On the eve of World War II, newly promoted Colonel Sullivan was ordered to Camp Shelby, Mississippi, where he played a critical role in helping to build up the camp “from scratch” to a modern installation capable of housing, feeding, and training upwards of 70,000 officers and men.

In 1943, Lieutenant General Clark sought and received permission from the War Department for his friend “Sully” to become the new Fifth Army Quartermaster in North Africa – thus initiating General Sullivan’s most important contribution to the nation, the Army, and to the Quartermaster Corps. For the next two years he overcame monumental logistical hurdles as the Fifth Army onto and then up the Italian peninsula. For his efforts he was promoted to Brigadier General, and awarded the Distinguished Service Medal and a Legion of Merit. From 1945-47 General Sullivan served as Quartermaster for the 15th Army Group in Austria.

General Sullivan served General Clark yet again during the Korean War, as Chief Quartermaster for the Far Eastern Command (1952-53). He retired from active service in 1953, earned an MBA from Harvard the following year, and was Dean of The Citadel in Charleston, from 1954 to 1959. After having served the nation and the Quartermaster Corps for many decades, General Sullivan died at his home in Charleston on 30 November 1977.