Back to List
MG Kester L. Hastings
Class of 1991 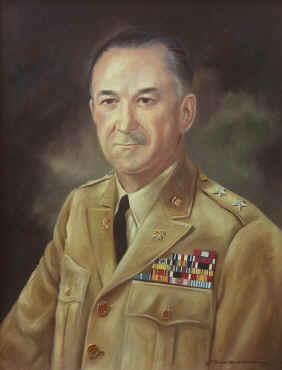 As Quartermaster General implemented the new “Single Manager” which gave the Quartermaster Corps responsibility for wholesale supply of food and clothing to all the U.S. Armed Forces.

Kester Lovejoy Hastings was born in Lewiston, Idaho, March 20, 1897. He graduated from the U.S. Military Academy on November 1, 1918, and was appointed as a Second Lieutenant of Infantry. His first assignment was with the Infantry Machine Gun Center at Camp Hancock, Georgia.

He joined the Third Infantry Division with the Army of Occupation in Germany and in 1919 and later was tasked to settle World War I claims in Paris. In 1920, he became a senior instructor for the first West Point Preparatory School at Camp Grant, Illinois and later was assigned to duty as an adjutant at Fort Wayne, Michigan.

From 1925-26, Hastings was a student at the Signal School.   He then joined the Fourth Infantry at Fort Wright, Spokane, Washington. In 1929, he was transferred to the 27th Infantry where he commanded the machine gun company until he became adjutant at Kilauea Military Camp, Hawaii. He later was assistant provost marshal for the Hawaiian Department.

Hastings graduated from the Army Industrial College in 1936 and from the Command and General Staff School in 1937. He then was assigned to Fort Douglas Utah and the Ogden Ordnance Depot as a construction Quartermaster.  In the fall of 1940, he joined the Construction Division, Office of the Quartermaster General, where he was in charge of  the operational construction of camps and industrial facilities in the United States.

In May 1949, General Hastings became Quartermaster of the Far East Command and was stationed in Tokyo, Japan.  During the Korean War he was responsible for planning air drop of supplies to beleaguered Allied troops, oversaw the return of remains of servicemen and expedited the supply of food, clothing, petroleum and other materials to the combat forces.  He was awarded the Silver Star for personal gallantry in Korea.  His citation for this award reads:

BG Kester L. Hastings, QM of the Far East Command was recently awarded the Silver Star for gallantry in action during the early stages of the Korean Campaign. In the words of the citation, General Hastings “voluntarily, and with complete disregard for his safety, made daring trips through areas under constant guerilla attack to obtain an accurate estimate of the situation vital to solving many complex problems that occur in logistical support during such critical periods. His presence in the forward areas under constant threat of enemy air attack and fire inspired personnel of the Quartermaster Corps to greater achievements and was a contributing factor in resolving supply problems, thus aiding United Nations forces in the subsequent launching of a counteroffensive. General Hastings through his valor and tireless devotion to duty, reflected great credit on himself and upheld the highest traditions of the military service.”

Major General Hastings died on May 31, 1983 and is buried in Arlington National Cemetery in Section 30 Site 530 Rh.