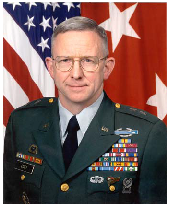 Major General Lust was born in Moran, Kansas in 1948.  He grew up and was educated in Kansas. He attended and graduated from the University of Missouri.  He enlisted in the US Army in 1969 and graduated from Infantry Officer Candidate School in 1970 and was commissioned as a Second Lieutenant in Armor Branch.  Later in his career, he branch transferred to Quartermaster.