Back to List
MG Montgomery C. Meigs
Class of 1986 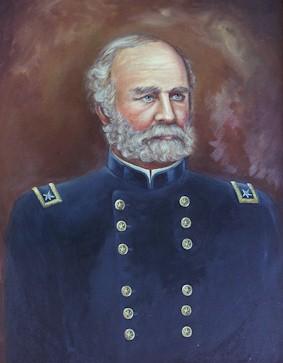 Appointed Quartermaster General in May 1861, during the Civil War, General Meigs was an efficient, hard-driving and scrupulously honest. He molded a large and somewhat diffuse department into a great tool of war.   He was one of the first to fully appreciate the importance of logistical preparations in modern military planning.  Under his capable leadership supplies moved forward and troops were transported over long distances with ever greater efficiency.

Montgomery C. Meigs, soldier, engineer, was born in Augusta, GA. During his childhood the family moved from Georgia to Philadelphia, where he entered the University of Pennsylvania in 1831.  He left that university in 1832 to enter the United States Military Academy, graduating fifth in his class in 1836.  After temporary assignment to the Artillery, he was transferred to the Engineer Corps spending a quarter of a century, devoting his conspicuous ability to many important engineering projects. Of these, his favorite was the Washington Aqueduct. This work, of which he was in charge from 1852 to1860, also involved the design of the monumental bridge across Cabin John Branch which for some fifty years remained unsurpassed as the longest masonry arch in the world.  From 1853 to 1859 he also supervised of the building of the wings and dome of the national Capitol, and from 1855 to 1859, the extension of the General Post Office Building, as well as the direction of many minor works of construction. In the fall of 1860. as a result of a disagreement over certain contracts, Meigs “incurred the ill will of the Secretary of War, John B. Floyd, and was “banished to Tortugas in the Gulf of Mexico to construct fortifications at that place and at Key West”. Upon the resignation of Floyd a few months later, he was recalled to his work on the aqueduct at Washington.

In the critical days preceding the outbreak of the Civil War, Meigs and Lieutenant Colonel E. D.Keyes were quietly charged by President Lincoln and Secretary Seward with drawing up a plan for the relief of Fort Pickens, Florida., by means of a secret expedition.  In April, 1861, together with Lieutenant. D.D.Porter of the Navy, they carried out the expedition, embarking under orders from the President without the knowledge of either the Secretary of the Navy or the Secretary of War. On May 14, 1861, Meigs was appointed colonel, 11th Infantry, and on the following day, promoted to brigadier general and Quartermaster General of the Army.  Of his work in this office James G. Blaine remarked, “Montgomery C. Meigs, one of the ablest graduates of the Military Academy, was kept from the command of troops by the inestimably important services he performed as Quartermaster General. Perhaps in in the military history of the world there never was so large an amount of money disbursed upon the order of a single man… The aggregate sum could not have been less during the war than fifteen hundred million dollars, accurately vouched and accounted for to the last cent.” Secretary of State William H. Seward’s estimate was “that without the services of this eminent soldier the national cause must have been lost or deeply imperiled.”

His brilliant services during the Civil War included command of Grant’s base of supplies at Fredericksburg and Belle Plain (1864), command of a division of War Department employees in the defenses of Washington at the time of Early’s raid (July 11-14, 1864), personally supervising the refitting and supplying of Sherman’s Army at Savannah (Jan 5-29 1865), and at Goldsboro and Raleigh, N.C., reopening Sherman’s lines of supply (March-April 1865). He was brevetted major general July 5, 1864.

General Meigs recommended that property in Arlington, Virginia owned by Mary Custis Lee, the wife of Robert E. Lee, be used as a military burial ground. Based on this recommendation, Arlington National Cemetery was created in 1864.  In October of that same year, his son, First Lieutenant John Rodgers Meigs was killed at Swift Run Gap in Virginia. He is buried at Arlington Cemetery.

As Quartermaster General after the Civil War, Meigs supervised plans for the new War Department building (1866-67), the National Museum (1876), the extension of the Washington Aqueduct (1876) and for a hall of records (1878). In 1866-68, to recuperate from the strain of his war service, he visited Europe, and in 1875-76 made another visit to study the government of European armies. After his retirement on February 6, 1882, he became architect of the Pension Office Building. He was a regent of the Smithsonian Institution, a member of the American Philosophical Society, and one of the earliest members of the National Academy of Sciences.

Meigs died in Washington on January 2, 1892 after a short illness and his body was interred with high military honors in Arlington National Cemetery. The General Orders (Jan.4,1892) issued at the time of his death declared that “the Army has rarely possessed an officer. . .who was entrusted by the government with a great variety of weighty responsibilities, or who proved himself more worthy of confidence.” General Meigs was inducted into the Quartermaster Hall of Fame in 1986 (Charter Year)