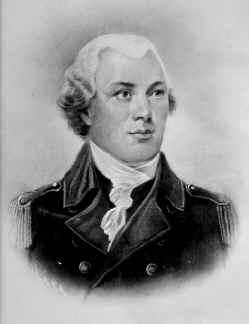 Nathanael Greene was born in Rhode Island in 1742 of Quaker parentage. From boyhood he was trained to work in the mills and the forge owned by his father. While he attended no college, he displayed an aptitude for study, and his reading was guided by Ezra Stiles, who became president of Yale.

In the face of the impending struggle with England he had helped to organize a militia company in 1774, but his fellow members denied him a lieutenancy because of his limping gait, and some went so far as to suggest that even as a private he would detract from the smart appearance of the company. Greene was deeply mortified, but his character is revealed by the fact that he remained in the company as a private.

In 1775 he was a member of the General Assembly as he had been in 1770 to 1772. When the news of the Battle of Lexington arrived, Greene and his fellow militiamen set out for Boston. Although the Loyalist governor recalled them, Greene and three others continued on. It was there that Greene’s ability began to be realized. The private became a brigadier general in the Continental Army on June 22, 1775. For the next three years he was in constant service as a field commander.

He was the general in whom Washington most confided. Though resolute and firm, Greene was a pleasant man, who controlled a naturally impulsive and nervous temperament. A man of great integrity, he later treated with scorn the accusations made against him as Quartermaster General.

When Mifflin began to neglect his Quartermaster duties, General Washington relied more and more upon General Greene’s energy and wisdom in matters of supply. The dire distress of the army at Valley Forge during the winter of 1777-78 forcibly called the attention of Congress to the necessity of filling the vacancy in the Quartermaster’s Department. Under pressure from Washington, Greene reluctantly agreed to accept the post.  Congress met the conditions of his acceptance and permitted Greene to retain his rank of Major General in the line and appointed John Cox and Charles Pettit his assistant quartermasters general.

Greene entered upon his duties with characteristic energy and began preparations for the spring campaign. He attacked the knotty problem of transportation, he established a chain of forage depots and he struggled to obtain funds from Congress for the purchase of horses, wagons, forage, tents, and other necessary supplies. So effective were his measures that the condition of the soldiers was much improved and their movement greatly facilitated, enabling them to pursue the British promptly when they evacuated Philadelphia in 1778. During the campaign that summer, Greene often combined the functions of Quartermaster General with the duties of a field commander.

His activities as Quartermaster General required unremitting, annoying, and thankless labor. The mounting expense of the Department alarmed him and gave rise to considerable criticism. Congress, concerned with reducing expenses, appointed three commissioners late in January 1780 to introduce such reforms as were necessary in the Department. In the midst of making preparations for the campaign soon to be launched by Washington, Greene learned that Congress insisted upon holding the Quartermaster General personally and financially liable for the acts of his subordinates. Greene flatly rejected this doctrine, and when he observed that the reorganization at the same time took away his two trusted officers, Pettit and Cox, he immediately sent in his resignation, on July 26. 1780. His letter of resignation so angered Congress that there was even talk of dismissing him from the service entirely. This move failing, Congress elected Timothy Pickering to the office of Quartermaster General on August 5, 1780.

General Greene returned to commanding troops. In the fall of 1780, when Congress suspended General Gates from his command after his crushing defeat at Camden, South Carolina., and asked Washington to name a successor, he promptly chose Greene. General Greene proved himself competent and thwarted the plans of trained British professionals, such as Generals Rawdon and Cornwallis, brilliantly leading the southern army to victory. His military exploits brought him the renown he had sought, and ranked him second to Washington in military leadership. The administrative ability he exhibited as head of the Quartermaster’s Department, his quick, comprehensive grasp of complex details, and the indomitable energy and industry with which he carried out his duties make him rank among the ablest of Quartermasters General.

General Green died when he was forty-four, less than three years after the war ended.  His early death was attributed to a sunstroke suffered while viewing, bald headed, the extensive rice plantation of a friend.  He had expended much of his personal fortune in support of the war in order to keep the southern army from starving.   He died on June 19, 1786, and was buried in the cemetery of Christ Episcopal Church in Savannah.  In 1902 his remains were reinterred beneath the Greene monument erected in Johnston Square, Savannah.General Greene was inducted into the Quartermaster Hall of Fame in 1989.