Back to List
MG Paul J. Vanderploog
Class of 2010 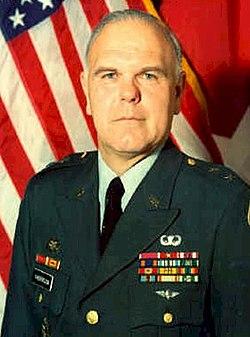 Major General Vanderploog was born in Rochester, New York on 22 March 1941. In 1963, he was commissioned a second lieutenant and awarded a Bachelor of Science Degree from Syracuse University. He also holds a Master of Science Degree in Business Administration from Virginia Commonwealth University. His military education includes the Infantry Officer Basic Course, Quartermaster Officer Advanced course, the Marine Corps Command and Staff College, and the Industrial College of the Armed Forces.

General Vanderploog has served in a variety of career building assignments preparatory to his most recent duties. He command the Aerial Equipment support Company, 15th Supply and Service Battalion, 1st Cavalry Division, Republic of Vietnam, throughout 1968 and returned to Vietnam as the Executive Officer, J4, Military Assistance Command in 1972. In 1974, he was assigned to the Office of the Deputy Chief of Staff for Logistics, Department of the Army. While serving in this capacity, General Vanderploog was selected to serve as Military Assistant to the Under Secretary of the Army. Returning to serve with the United States Army Europe in 1978, he assumed command of the 8th Supply and Transport Battalion, 8th Infantry Division, and subsequently served as the division’s Assistant Chief of Staff, G-4.

He is married to the former Mauricette Bouglé of Fontainebleau, France; they have one son, Scott.