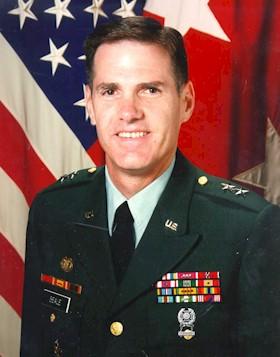 General Beale graduated from Wake Forest University in Winston Salem, North Caroline, in June 1964, with an Economics degree. A distinguished military graduate in the ROTC program, he was commissioned a second lieutenant in the Quartermaster Corps.

During his 32 years of active duty service, General Beale served in a wide variety of assignments from platoon to Department of the Army level including tours in Korea, Vietnam and Europe. He commanded companies in the 13th Supply and Service Battalion in Korea (1967) and the 4th Supply and Transportation Battalion in Vietnam (1969-70); and was Commander of the 142nd Supply and Service Battalion, 3rd Support Command, United States Army Europe (1979-82). He also commanded the 3rd Armored Division’s Division Support Command in Europe (1986-88).

He served with noted success as a Logistics Staff Officer and Executive Officer at the Department of the Army Deputy Chief of Logistics; as an Assignment Officer at the Army Military Personnel Center; Chief of Staff/G4, Eighth U.S. Army, Korea; Chief of Staff, C-4/J-4, United Nations Command, U.S. Forces Korea, Combined Forces Command, Seoul, Korea; and Chief of Military Plans and Operations, and Concepts and Doctrine Divisions at Army Materiel Command.

General Beale served as Director of the Defense Commissary Agency (DECA), the nation’s ninth largest grocery chain, with annual sales of $5.5 billion, from November 1992 through September 1999. He retired from active duty in September 1996, but at the request of senior Defense Department officials continued to head DECA as a Senior Executive Service civilian for another three years.