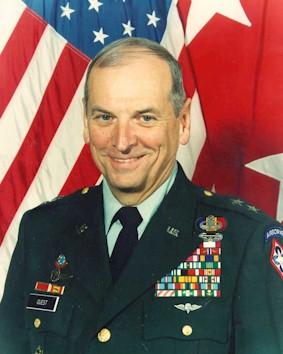 After graduating from North Georgia College ROTC in June 1963, Major General Guest entered service as an Infantry second lieutenant. As a company grade officer he served as a platoon leader with the Berlin Brigade in Germany (1963-65) and commanded the 600th Quartermaster Company, XVIII Airborne Corps at Fort Bragg, (1968-69).

Afterwards, General Guest commanded the 3rd COSCOM in Wiesbaden, Germany, and was Deputy Chief of Staff for Logistics, United States Army Europe and Seventh Army, from 1991 to 1993. Then to Fort Lee where he became the 43rd Quartermaster General of the Army, and, prior to his retirement in 1998, Commander of the U.S. Army Combined Arms Support Command. He has been described as a Log Warrior second to none, and “the consummate Quartermaster.”