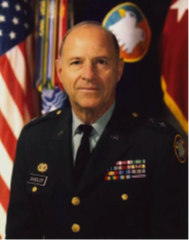 Major General Sandler was born in Brooklyn, New York. He spent the first two years of his life in Brooklyn before moving with his family to Minneapolis, Minnesota and years later moving again to Des Moines, Iowa.  He graduated from Grinnell College in Iowa with a bachelor’s degree in business administration enlisting in the Army that same year. Following completion of basic training, he was deployed to Germany where he served with the 613th Field Artillery Battalion. At the end of his active-duty enlistment, he was transferred into the Army Reserve. After four years of enlisted service with the Army Reserve and the Iowa National Guard, he received a direct commission as a second lieutenant in the United States Army. General Sandler occupied multiple command and staff officer positions throughout his years of military service including, Commander, 13th PSYOPS Battalion, Chief of Staff and Deputy Commander, 103rd Corps Support Command, Commander, 88th Army Reserve Command and Commander, 86th Army Reserve Command. He culminated his 36-year career as an Army Reserve officer with his assignment as Chief of the Army Reserve and Commander of the United States Army Reserve Command in 1991.