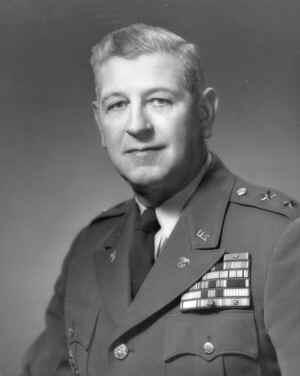 General Evans was born February 7, 1910, in Rhode Island, and he died September 16, 1976. He was commissioned as a Second Lieutenant in the Infantry after his graduation from the United States Military Academy at West Point in 1933. His advanced education included attendance at the Advanced Management Program at Harvard, as well as attending the Industrial College of the Armed Forces.

For his last assignment, General Evans was first Executive Director for Logistics Plans and Systems at the Defense Supply Agency. In this position, he made his most lasting contribution to the Quartermaster Corps. He oversaw the development of policies and procedures for joint and defense agency support that continue within the Defense Logistics Agency today.

General Evans’ awards and decorations include the Distinguished Service Medal, the Legion of Merit, the Bronze Star Medal, and the Army Commendation Medal.