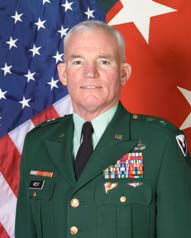 Selected highlights of his career include his final assignment while on active duty where General West served as the Commanding General, US Army Tank-Automotive Command in Warren, Michigan. As intense combat operations in both Iraq and Afghanistan were on going, his command responsibilities for equipping all US Army forces, (200,000+) with ground combat systems, weapons systems, combat support systems and Soldier uniforms and protective equipment was extremely critical. Through General West’s  leadership, not only were the forward combat deployed forces sustained in an outstanding and timely manner, he also was instrumental in the rapid fielding of new equipment which resulted in substantial improvement to Soldier combat effectiveness, safety, health and welfare as well as the savings of significant fiscal resources.

Prior to assuming command of TACOM, General West was the Commanding General, 21st Theater Sustainment Command, US Army Europe and 7th Army, Kaiserslautern, Germany. In this capacity he was responsible for sustainment of all US Army forces operating in Europe and Africa. Again, he commanded in a significant logistical command with a huge mission workload, geographic footprint and widely dispersed units.

As a Brigadier General, General West served as the Commanding General, United States Army Quartermaster Center and School at Fort Lee, Virginia and served simultaneously as the 48th Quartermaster General of the Army. He was responsible for training and development of over 25,000 personnel per year as they prepared for assignments to combat units.  Additionally, he was responsible for all Quartermaster systems in support of the Army.  During his tenure as the Quartermaster General, due to his recent combat experience as the head joint logistician for OIF, General West was instrumental in applying his firsthand knowledge of supporting OIF and the Global War on Terrorism in affecting multiple and significant changes and advancements in our Quartermaster’s doctrine, training and equipping. He ensured Quartermasters were trained to fight and sustain immediately upon joining their first unit of assignment as many reported to units in the process of deploying to the combat theater of operations.

General West also served a one year tenure as the Director of Logistics in the US-led Multinational Forces in Iraq stationed in Baghdad, during Operation Iraqi Freedom. General West was personally hand selected by the Vice Chief of Staff, Army for this exceptionally important position at a time when the multinational forces in Iraq had defeated the initial conventional threat but were then engaged in the ever growing insurgency phase. He was responsible for “Without Fail” supply, maintenance, transportation and essential services” in support of over 120,000 personnel in a deployed combat theater.